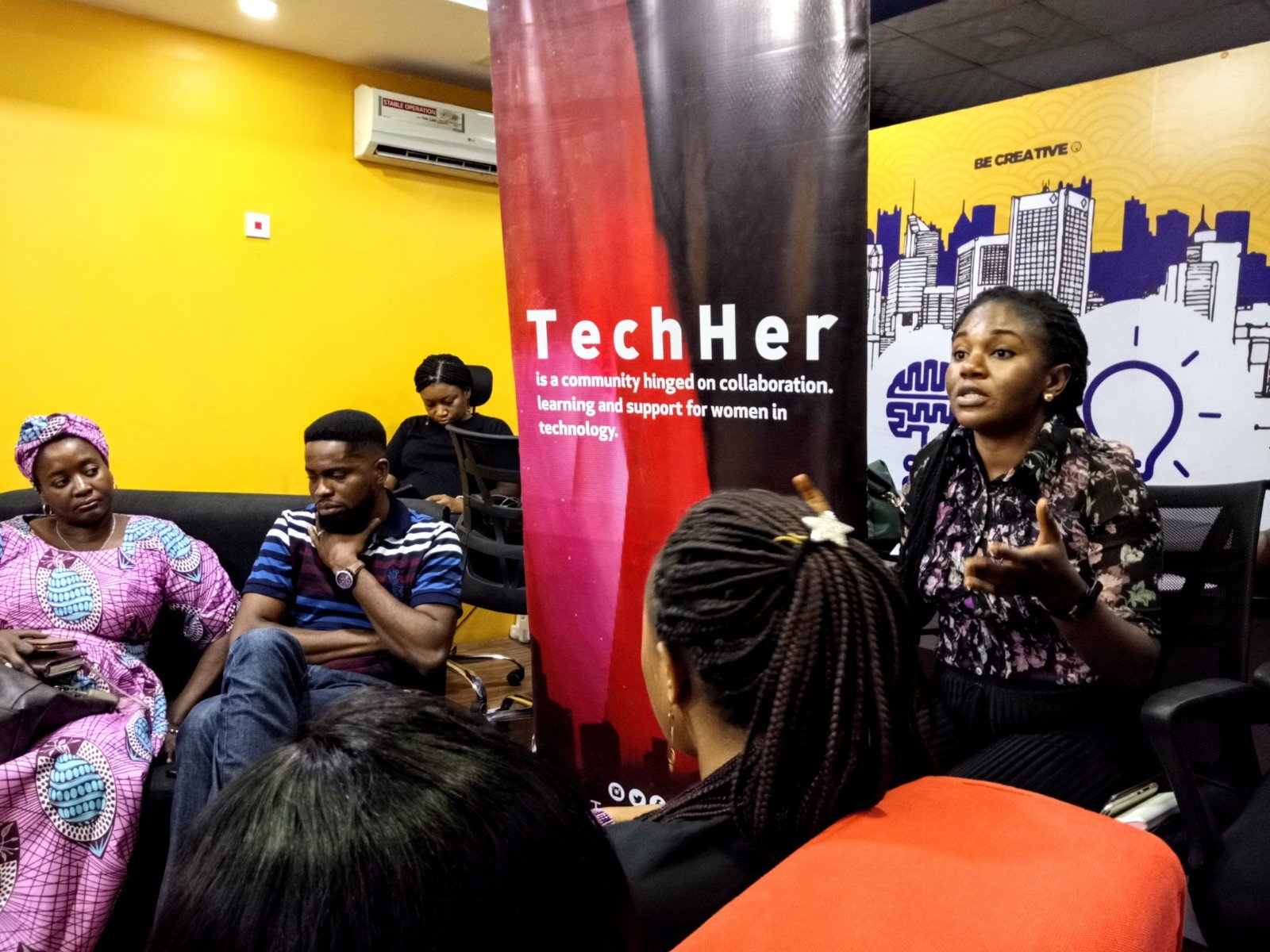 The 4th edition of the monthly Coffee & Circumvention (C & C) meet-ups  held at the Aiivon Innovation Hub, Abuja on Thursday, January 23rd in collaboration with Clean Technology Hub Innovation Centre (CTH). To put it simply, it was quite a blast.

Tackling the theme: Defining a Sustained Digital Advocacy for Climate Emergency in Nigeria, TechHer’s Peter Akinnusi and Chidinma Ejike of CTH moderated the sessions, laying down a marker for the rest of the evening’s gripping conversations.

Peter gave a brief overview of TechHer’s passion to see technology put to use for honourable causes and shared the idea behind C&C, before Daramfon Bassey took the responsibility of enlightening the audience about CTH. He further encouraged everyone in attendance to take a moment to make new friends. This call worked magic, with strangers bonding and the stage set for the day’s discourse.

As is always the case at C & C, the crowd warmed up pretty quickly to the conversations, engaging in various ways about how digital platforms can be utilized in addressing emerging and imminent environmental crises in Nigeria.

A screening of the short film, Nowhere to Run, which summed up the emerging environmental time bomb that’s ticking globally, highlighted the dire state of things. As with the rest of the world, Nigeria’s coastline and habitat are in the throes of  varying degrees of climate actions. These are sure to result in fatal outcomes if left unchecked. The screening left no doubt that at this rate we’ll all soon have nowhere to run to pretty soon.

Participants invited to share individual experiences regarding climate change. Folahon Johnson, and Bofamene Joseph respectively narrated how their childhood communities have all been affected by destructive human activities which have contributed to degrading the environment. For Folahon, mining activities in his Jos – Plateau State neighbourhood have resulted in erosion, and deep gullies while Bofamene narrated how the vanishing coastlines of her Bayelsa community are a nightmare come to life. Others recalled the earth tremor incidents around the Mpape area of Abuja as another case of climate emergency staring us in the face.

Ify Malo, CEO/Co-founder Clean Technology Hub, noted that the prevailing  aggravated temperature around the country is enough signal that things are going out of hand, wondering why the government is hesitant in tackling this issue. Environmental pollution and improper waste management were also identified as other reasons causing problems to the environment and other health related complications.

The role of digital advocacy in Nigeria’s climate emergency

With the government’s lethargic attitude towards environmental challenges flagged, the need for citizens to step in becomes critical using digital technology as a means for advocacy.

Participants debated the best approaches toward realising the ambition. They resolved on building a community of advocates, with the mandate of articulating an action plan for digital advocacy. The advocacy, it was agreed, would be approached on both the online and offline fronts. The former was meant to involve creating hashtags, tweetchats, creating engaging content and co-opting celebrities & influencers to join in amongst other content-oriented approaches. For the offline charge, participants agreed that conventional media, volunteers  and religious leaders ought to be involved in the campaign.

Before winding up, a comprehensive database of climate and clean energy advocates was suggested as a way to arm stakeholders to track progress and support each other in the cause .

The key take-away from the meet-up was the resolution for attitudinal change from participants who also agreed with the suggestion to create a WhatsApp Group dedicated to the purpose of the advocacy.

CTH’s Kolawole and Peter (again) came up to thank everyone for coming out to have such a great conversation, stressing that the opportunity to collaborate was open to all and sundry. The event then rounded up with some networking and of course further indulgence in the refreshment that was available.

Judging from the passion of the contributors, it is safe to say that a climate change army exists. Equally as important, is the excitement to create a bold new world as we look forward to the next edition of C & C.