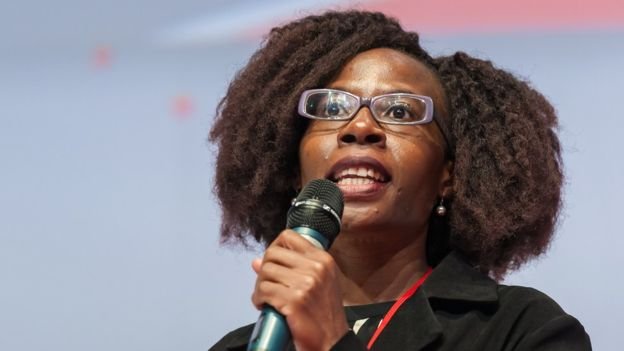 Sylvia Mukasa has done a lot of good work around technology.  She is from Kenya, Nairobi and a graduate of Economics from Egerton University. She bagged her M.sc in E-Business from University of East Anglia in 2002.

She is a certified chartered accountant by Kaplan FTC Birmingham.

She has bagged several awards and honors such as:

In 2015, she was a delegate for UNESCO who strategized the framework for Transform Africa Summit. The workshop was aimed at empowering and offering young African women entrepreneurs a quality training on how to develop, market and promote mobile Apps.

She served as the regional ambassador for Technovation Kenya; a tech entrepreneurship program and competition for young women in developing mobile Apps

From January 2011 – September 2012, she was the strategic planning manager for the Sub-Saharan Africa Region at Ericsson.

In 2012, she founded Globalx Investments Limited out of her passion to use technology in solving business issues as well as provide solutions with a social impact using ICT and Telecomms. The core business of Globalx is to provide high-end consultancy in technology and telecommunication.

In 2008, she joined FSS/Telecloud ­(FSS deals with the provision of VOIP and business consulting on VOIP/Interactive Voice Response technologies mainly for SMEs ) as their strategy and business development expert, and worked for a period of  2 years and 4 month.

Sylvia worked in United Kingdom at Nestor Healthcare Group Plc, as the finance and business developer between January 2005 to July 2008.

Between 2001-2002, she worked as an office administrator at Norwich Union International.

She is passionate about her beliefs: which is engaging more young people to discover their inherent talents, and focus on what they do best.