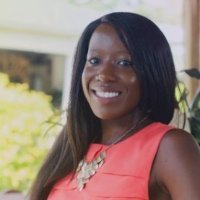 Teresa Mbagaya is a young enterprising woman from Zimbabwe and an activist born in Kenya, Nairobi. The 28 year-old holds a Bachelors degree from Yale University. She attended London School of Economics and Politics Sciences. She also has a certificate in Advanced Arabic from SIT Graduate Institute in Washington DC.

She is a member of Management Leadership for Tomorrow, Africa Leadership Network, Yale Black Alumni Association and an Advisory Board member for Muzinda Umuzi Hub (Zimbabwe’s first entrepreneurship and innovation Hub).

Miss Teresa Mbagaya is passionate and driven about education technology and has received notable awards and scholarships for being zestful in the cause she cares about.

In 2006, Teresa Mbagaya Co-founded Bidii Children Foundation. Bidii is a non-profit dedicated to promoting education in rural area of Bungoma; a district in Western Kenya.

She started pursuing her career in technology at Google Inc. in the United State of America in 2010. She worked in various capacities at Google. She was the account manager for education. It was her responsibility to provide market solutions to global education clients, manage annual revenues of $80-100M, and design short and long term strategies for such entities.

After being selected as the one of the youngest to participate in the Google Reach Leadership Program, she worked as an Outreach and Business Consultant in New-Delhi India over a period of 2 months. She led outreach projects including: consulting projects with non-profit, developing marketing and social strategies for educational institutions and capacity building training for various civil society organizations.

She also worked as Project Manager and Product Marketer at Google Inc. where she organized the first of its kind. She organised technology education conference for thousands of students and educators across the globe. The aim was to bring more users to products like Google+ and Hangout on Air.

In May 2013, she was appointed team lead for the development of Econet Education in Zimbabwe. She was the youngest of all the executives in the organisation. Econect Education is a sub-section of Econet Wireless Group which aims to research, develop, deploy and launch overlay services through mobile-based application to impact on students.

She also launched an education platform called EcoSchool that provides on-the-go and reliable access to educational materials through an EcoSchool tablet.

Under her supervision at the organization, they launched a platform called EcoSchool Academy which offers interactive mobile courses covering over 50 topics.

Presently, Teresa is the Education lead for Microsoft for East and South Africa.

Teresa Mbagaya has been able to enhance the education system for Africans by efficiently utilizing technology in a way that both benefits her and those around her. We are so proud of her hard work!